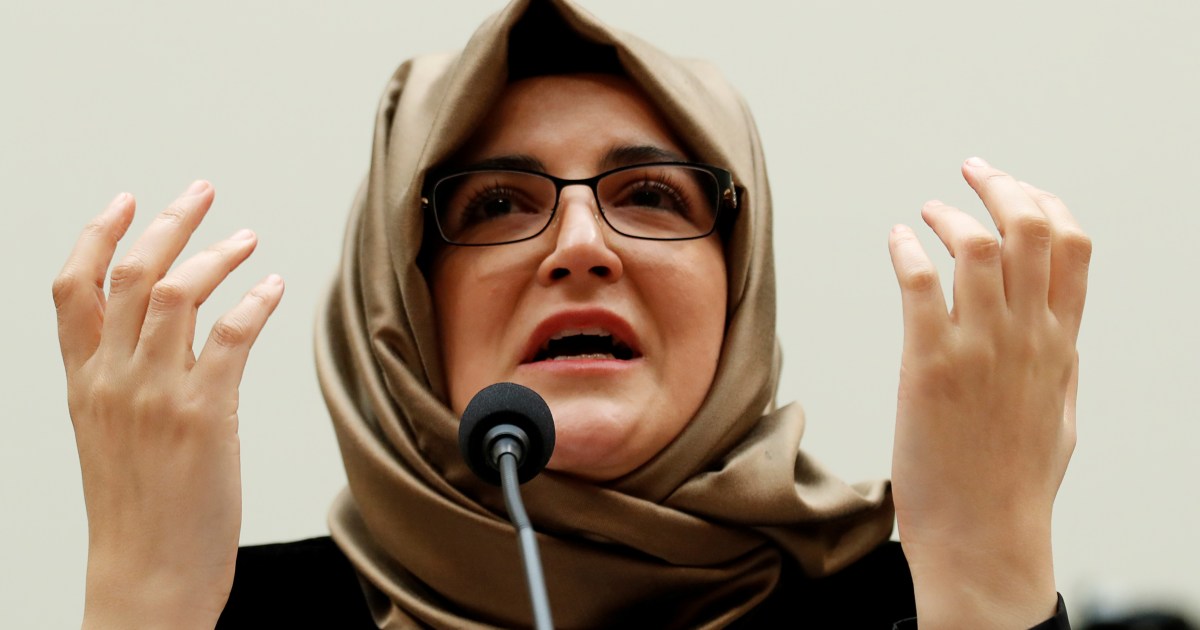 Hatice Cengiz demands punishment for the crown prince ‘without delay’ for his role in the murder of Jamal Khashoggi.

Cengiz said: ‘following this report, there is no longer any political legitimacy for the crown prince’ [File: Kevin Lamarque/Reuters]

The fiancée of slain Saudi journalist Jamal Khashoggi is calling for Crown Prince Mohammed bin Salman to be punished after a US intelligence report found that the kingdom’s de facto ruler played a role in the murder of the journalist in 2018.

Khashoggi, a columnist for the Washington Post newspaper who was critical of Saudi policies under bin Salman, was killed and dismembered by a hit squad in the Saudi consulate in Istanbul.

“It is essential that the crown prince… should be punished without delay,” Hatice Cengiz said on Twitter.

“If the crown prince is not punished, it will forever signal that the main culprit can get away with murder which will endanger us all and be a stain on our humanity.”

The US intelligence report on Friday found that the prince, popularly known as MBS, had approved the operation that led to the killing of Khashoggi. Former US President Donald Trump’s administration had held back the long-awaited report.

The report also cited MBS’s “support for violent measures to silence dissidents abroad, including Khashoggi” among the factors the assessment was based on.

“Since 2017, the Crown Prince has had absolute control of the Kingdom’s security and intelligence organizations, making it highly unlikely that Saudi officials would have carried out an operation of this nature without the Crown Prince’s authorization,” the report said.

The four-page report names 21 individuals who participated in or were otherwise complicit in Khashoggi’s murder.

Washington has imposed sanctions on some of those involved, but not Prince Mohammed himself.

The Saudi government, which has denied any involvement by the crown prince, rejected the report’s findings.

US President Joe Biden’s administration on Friday imposed a visa ban on some Saudi officials believed to be involved in Khashoggi’s killing and placed sanctions on others that would freeze their US assets and generally bar Americans from dealing with them.

Asked about criticism of Washington for not sanctioning MBS directly, Biden said an announcement would be made on Monday but did not provide details, while a White House official suggested no new steps were expected.

“Starting with the Biden administration, it is vital for all world leaders to ask themselves if they are prepared to shake hands with a person whose culpability as a murderer has been proven,” said Cengiz, who has been campaigning to get justice for her slain fiancé.

The Saudi government, which initially said it had no information on Khashoggi, later accepted responsibility for the killing but said it was a rogue operation that did not involve the prince.

Cengiz said that “following this report, there is no longer any political legitimacy for the crown prince”.

“The truth – that was already known – has been revealed one more time, and it is now confirmed.”

But she said the US report did not go far enough.

“Yet this is not enough,” she warned, “since the truth can only be meaningful when it serves justice being achieved.”