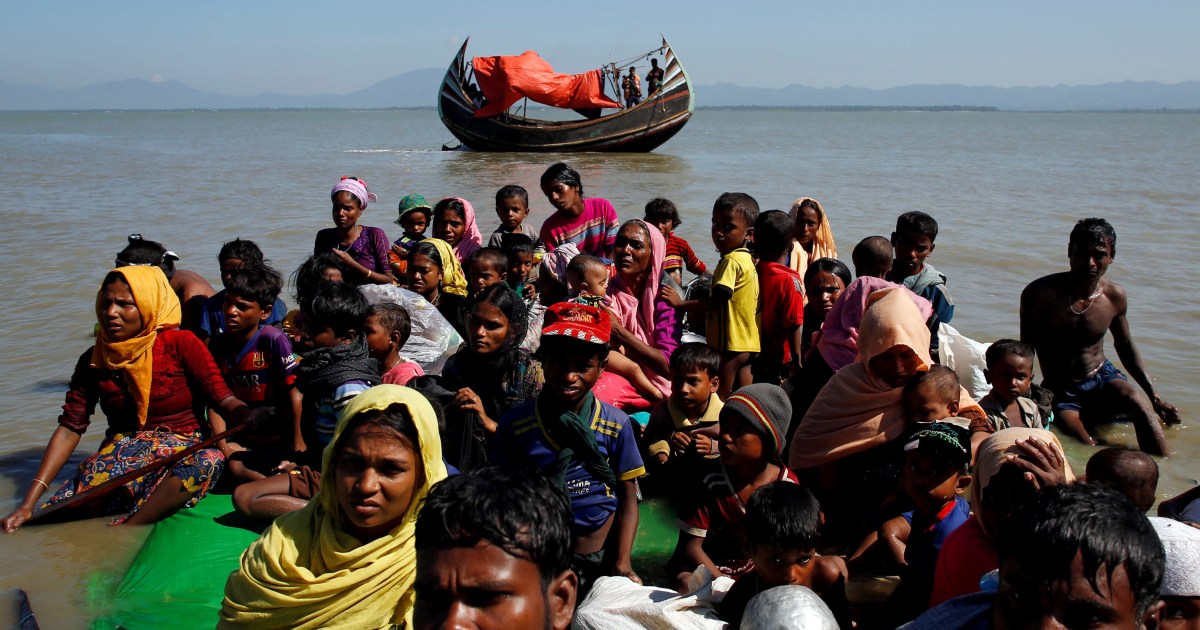 Eight on board the boat have died and many of the 81 survivors are sick and suffering from extreme dehydration, having run out of food and water.

Rohingya refugees on a makeshift boat as they are interrogated by the Border Guard Bangladesh after crossing the Bangladesh-Myanmar border, at Shah Porir Dwip near Cox’s Bazar, Bangladesh [File: Navesh Chitrakar/Reuters]

Human Rights Watch and Rohingya refugees in India are urging the government to provide refuge to 81 Rohingya whose boat has been drifting in the Andaman Sea for over two weeks.

Since last month, India has been providing food, medical and technical aid to Rohingya crammed on a fishing boat that was found drifting in international waters after it left southern Bangladesh.

The Rohingya had hoped to reach Malaysia but the boat’s engine had technical issues.

Eight people on board the boat have died and many of the 81 survivors are sick and suffering from extreme dehydration, having run out of food and water four days into their journey, which began on February 11.

India’s coastguard repaired the vessel but was not permitting it to enter Indian waters, wanting it to return to Bangladesh.

“We are begging Indian authorities to bring our people to land. How can all countries refuse to accept 81 lives stranded in international waters?” said Sabber Kyaw Min, director of Rohingya Human Rights Initiative (RHRI) in India, on Monday.

“Eight are already dead, we have a right to receive their bodies,” Min said, adding that he and about 16,000 Rohingya refugees living in India were urging the government to accept the distressed refugees.

Meenakshi Ganguly, the South Asia director of Human Rights Watch, said India should uphold its obligations under international law and protect the refugees.

“The Rohingya have been so persecuted, and for so long, they are desperate to find a place where they can be safe and made to feel welcome. And yet, no country in the world, even those that sympathise with them, are willing,” Ganguly said.

India’s foreign ministry did not respond to questions on whether the 81 Rohingya will be allowed to enter India, nor did it provide an update on talks with Bangladesh on the issue.

New Delhi has not signed the 1951 Refugee Convention, which spells out refugee rights and state responsibilities to protect them. It also does not have a domestic law protecting refugees.

More than one million Rohingya refugees from Buddhist-majority Myanmar are living in teeming camps in predominantly Muslim Bangladesh. Many of them fled their country after Myanmar’s military conducted a deadly crackdown on them in 2017.

Myanmar doesn’t recognise the Rohingya, who have been there for generations, as an ethnic group and insists they are Bangladeshi migrants living “illegally” in the country.

Last week, India said approximately 47 of the occupants of the boat are in possession of ID cards issued to them by the United Nations refugee agency, UNHCR, office in Bangladesh, stating that they are displaced Myanmar nationals.